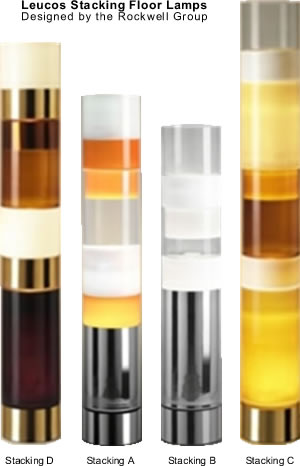 Leucos has introduced the David Rockwell Collection, the first time an American has been commissioned to design for this Italian lighting company. The new Collection includes Stacking, a Floor lamp inspired by Japanese lacquered stacking cups. This beautiful lamp is a piece of sculpture, light and colorful. 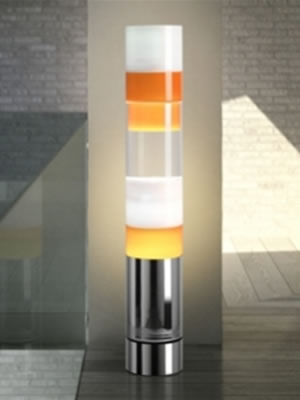 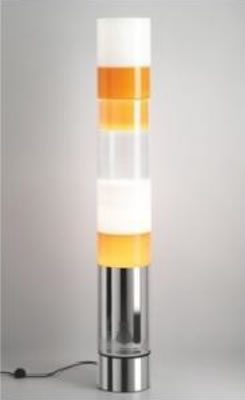 Leucos Stacking A Floor Lamp
Designed by the Rockwell Group 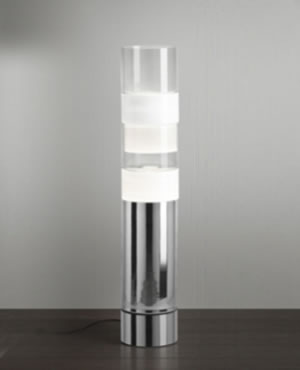 Leucos Stacking B Floor Lamp
Designed by the Rockwell Group 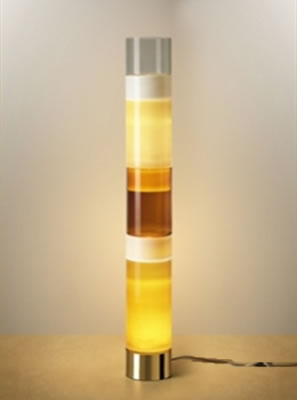 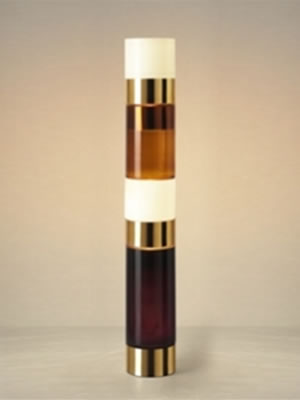 Leucos has introduced the David Rockwell Collection, the first time an American has been commissioned to design for this Italian lighting company. The new Collection includes Stacking, a Floor lamp inspired by Japanese lacquered stacking cups. This beautiful lamp is a piece of sculpture, light and colorful.

Stacking A, B Base Finish: Polished Chrome

Rockwell Group, is a New York based firm internationally known in the architecture world for its craftsmanship and unique blend of the experiential and the theater of design. The firm has created award-winning spaces for clients that include museums, cultural centers, children's hospitals, restaurants, libraries and Broadway shows. Rockwell group is recognized for its use of innovative materials in unconventional ways to evoke both the history and future of a space. The crossdisciplinary firm is currently working on such projects as the interior for the Jet Blue terminal at JFK airport; Steelstax, a cultural and performing arts education center in Bethlehem, PA; the Elinor Bunin Film Center at Lincoln Center in New York; and a number of NYC public school libraries for the Robin Hood Foundation.

Long before turning his attention to architecture, David Rockwell harbored a fascination with staged environments. Growing up in Chicago, Deal, New Jersey, and Guadalajara, Mexico, Rockwell was a child of the theater: his mother worked as a vaudeville dancer and a choreographer and would cast him in community repertory productions. Rockwell brought his passion for theater and an eye for the color and spectacle of Mexico to his architecture training at Syracuse University; these formative influences continue to have strong reverberations throughout his practice. Rockwell Group is an award winning, cross-disciplinary architecture and design practice. Based in New York City with a 160-person staff, David and his firm specialize in cultural, hospitality, retail, theater and film design. Characterized by rich materials, innovative narrative and a sense of theatre, recent projects by the Rockwell Group include Lincoln Center's Film Society; Gap's newest retail brand, Forth & Towne; set designs for the Broadway hit musicals "Hairspray" and "Dirty Rotten Scoundrels;" the Chambers Hotel (New York) and W (New York) hotels; the Kodak Theatre (Los Angeles) and numerous restaurants located internationally including Nobu and Nobu Fifty Seven (New York); Café Gray at the Time Warner Center; Pod (Philadelphia); Roppongi Hills (Tokyo); and Maze (London). David Rockwell has been honored with a lifetime achievement award from Interiors magazine, is included in Interior Design magazine's Hall of Fame and was awarded the Presidential Design Award for the Grand Central Terminal renovation. Rockwell serves as Chairman of the Board of the Design Industries Foundation Fighting AIDS (DIFFA) and is a Board Member of The Public Theater and City Meals on Wheels. "Pleasure: The Architecture Design of Rockwell Group, " a book about the firm published by Universe, documents Rockwell Group's first 18 years. This fall, Phaidon will publish Rockwell Group's second compilation, "Spectacle."

Barry Richards is a Senior Associate and Studio Leader at Rockwell Group. He has undergraduate degrees in Painting and Architecture from the University of Washington and a Masters of Architecture from Princeton. Prior to joining Rockwell Group, Barry has worked with clients such as Disney, FAO Schwarz, Barnes & Noble and Alessi, designing products ranging from kitchen accessories to jewelry. For the past seven years, he has been leading product development, special projects and set design. Currently, Barry is responsible for the creative direction of Meijer stores, focusing on corporate identity, graphics and products, and the store environment. Barry is also overseeing the development of more than 100 products for Mikasa and an exhibition for the Walt Disney Foundation. His work has included sets for the "Rocky Horror Show, " the musical "Hairspray, " "Omnium Gatherum, " "Dirty Rotten Scoundrels" and "Team America: World Police." Recent installations and products include "Fire and Smoke, " an Installation: for Swarovski's Crystal Palace, a martini glass for Bombay Sapphire, several bars for Esquire's New York Apartment and Los Angeles House, a custom lounge chair made of Dupont Corian for Grand Central Terminal, lighting for Baldinger Architectural Lighting, textiles for Design Tex, and the firm's first monograph "Pleasure: The Architecture and Design of Rockwell Group." His chariTable work includes projects for Design Industries Foundation Fighting AIDS (DIFFA) and Citymeals-on-Wheels.

Carmen Aguilar is a Principal at Rockwell Group. She attended the New York Institute of Technology where she received her Bachelor of Architecture degree. Carmen has been with Rockwell Group for 16 years where she oversees one of the three design studios with a team of 16 members. The studio recently completed projects include the Children's Hospital at Montefiore in the Bronx, Comerica Park for the Detroit Tigers, offices for McCann Erickson, New York City, offices for Foote Cone Belding, New York City, store environments for the mid-western retailer Meijer and the Carlton Hotel and Country restaurant, New York City.

See more choices on a desktop computer or by turning your screen horizontal. 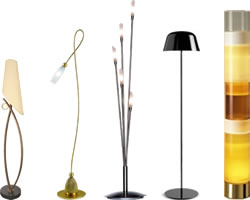 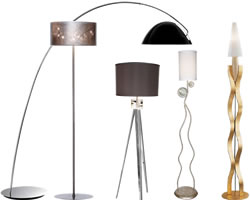 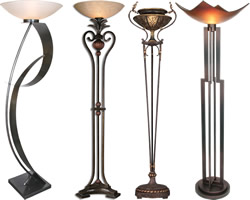